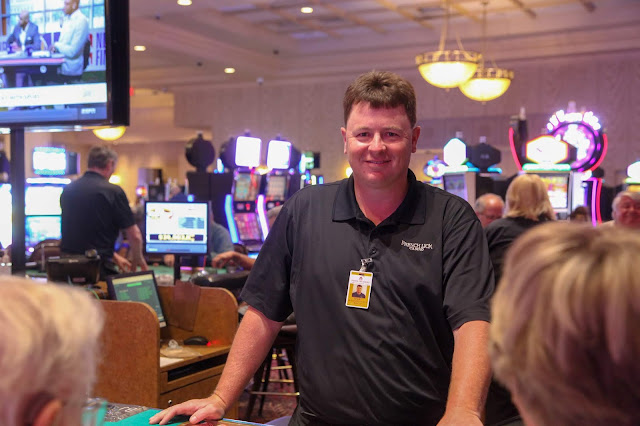 What questions do you get the most from players?
They want to know where you’re from, especially if you’re from French Lick, they like to find out about the restoration of the resort. We get to know our players on a personal level; that’s why a lot of people like coming here. Players will get to know you and want to know how your kids are doing.

How did you wind up behind the table?
I’m from Bedford Indiana (about 40 minutes from French Lick) and I was working at the Ford plant in Bedford which closed, unfortunately. A couple friends of mine told me about what was going on in French Lick (during the resort’s restoration in 2006). Honestly, it was a stroke of luck because I just rode along with a couple friends one day to an open blackjack training class. I just took to it right away and it stuck. It’s amazing to say 12 years later, here we are.

Do you have to be good at math to deal table games? It’s not complicated math you’re doing, but you have to be able to think on your feet with a lot of eyes on you.
Not necessarily, because I did not enjoy math at all growing up. A lot of people are intimidated about being a table games dealer because of the math aspect. It’s all things you can memorize, just like when you were a kid. It’s not as hard as it looks. 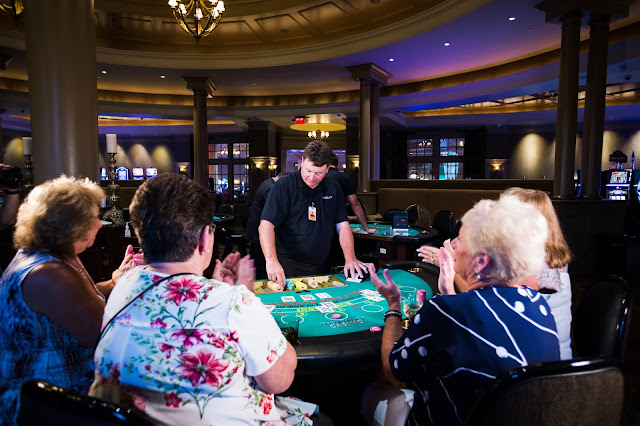 Any memorable stories about one of those personal relationships you were able to build with a player?
A few years ago, I got to know a player dealing craps to him. Friendly, super nice guy. My daughter, who is 17 now and was around 12 then, told me she wanted to be a vet. I just happened to get to know this craps player who was a veterinary surgeon. He’d ask me how the kids are doing, and I told him my daughter wanted to be a vet. This gentleman actually told me, “When she gets out of school, have her get a hold of me, I’ll set her up and point her in the right direction with the best chance of becoming a vet.” And I thought that was a pretty neat thing for him to say. That’s the kind of thing that happens here; it’s why we like working here. We develop a lot of relationships like that.

Outside of work when you’re on the other side of the table, what games do you enjoy playing yourself?
I don’t get to gamble much, but when I do go, it’s craps and blackjack, basically. Sometimes I’ll warm up with roulette. I never knew anything about roulette before I came to work here, so learning how to deal it, I’ll dabble in some roulette occasionally when I go to another casino. 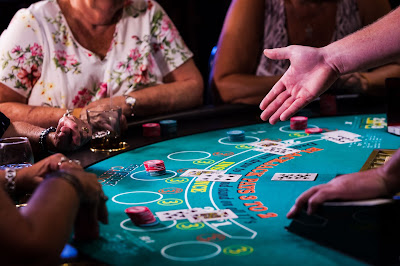 There’s interesting behind-the-scenes things about dealing table games — for instance, keeping your hands clear and out in the open (can’t touch your face, can't put your hands in your pockets).
All the stuff you take for granted like your head itches you want to scratch it, you can't do that on the table. You have to clear your hands so surveillance can see them for security reasons. That probably took me about a year to really get used to.

Even things like taking bathroom breaks aren’t easy when you’re dealing table games.
And we’ve all had to do it. You have to let your pit boss know, and they’ll generally have to make a call or find another dealer that perhaps is on their way to break to come tap you off your game so you can take a break. But that’s funny; it does happen.

Anything else interesting about the job that people wouldn’t realize?
People tell you, “We live 30 minutes from this other casino, but we drive two hours to come here, because you guys are fun, we like it here.” I once had a co-worker tell me he was reading about me on TripAdvisor. This co-worker said these people were talking about how you had them laughing and having a good time on the craps table, and I thought, “Oh, that’s neat.” That’s probably the most interesting thing for me about all this after being here over a decade. 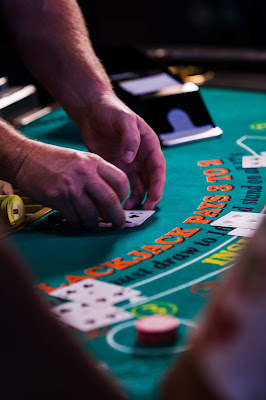 Players at your table are technically playing against you, the dealer. But when someone gets on a roll and is doing really well, is that exciting to you?
Absolutely. I make the comment to players when they get on a roll and they’re winning, “It’s always a lot more fun when you win, isn’t it?” And they automatically look at me and say, “You’re doggone right it is.” It’s fun for us, when players are winning. You’re having more fun, so that obviously is going to be more fun for the dealer as well.

You probably also see the occasional player who’s in the background, kind of hovering behind the table. You can tell they want to get in but they’re not sure of themselves. How do you handle that?
I see that often here. Especially on roulette, is a good example. Roulette is a very, very busy game with people climbing over the top of each other to make bets, and I will always tell a player, “I’ve got plenty of room here if you’d like to play.” I talk to players all the time that are standing or hovering, you can tell they’re interested — should I play, should I not play? I’ll even move people around and say, “Let’s get this gentleman in here to join us, he’s ready to have a good time.”

And that’s what it’s all about, right?
I feel lucky that I found a job that kind of suits my personality and my skill set. I like to laugh, have fun, have a good time wherever I’m at. You get to go to work and do that. That’s probably the best part about this job. 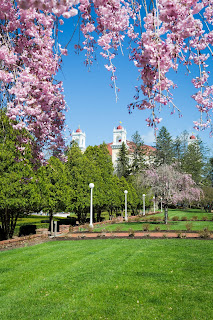 You've Been Asking; A Look at Our First Re-opening Plan

Dear Valued Guest,  We are touched by how much the resort means to you. We have been fielding re-opening requests since voluntarily shutting down in mid-March and the volume picked up significantly following Governor Holcomb’s “Back on Track Indiana” plan.  It’s easy to understand the pent-up demand. A lot of people have been thinking about that first trip they would take after things improved and just waiting for the moment they could book a stay. Memorial Day has traditionally been one of our busiest weekends of the year and we could likely fill the hotels. But not this year. We are making the choice to be very methodical about the way we re-open all segments of our business. The first step in our multi-layered approach began on May 15, with a limited amount of overnight golf guests. For the next phase, West Baden Springs Hotel will open for overnight leisure guests Memorial Day weekend.  Again, this will no way be a sell-out, and this is intentional. 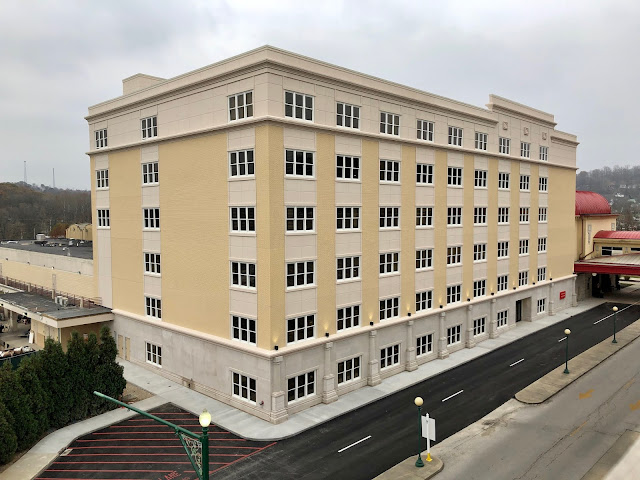 A Sneak Peek Inside the New Valley Tower and Valley Bar

Starting tomorrow, French Lick Resort gets a little bigger. Our brand-new Valley Tower hotel and Valley Bar open their doors Friday, November 15, and before we officially welcome our first guests, let’s take a quick peek inside. First stop: the Valley Tower rooms. Designed to complement the style of rooms you'd find at our historic French Lick and West Baden Springs Hotels, the 71 rooms in the six-story Valley Tower come in a variety of configurations and sizes with modern decor and spacious options. Many of these rooms can connect to other rooms to give you 1-bedroom, 2-bedroom and even 3-bedroom configurations — ideal if you've got a larger crew to accommodate. With a price point between the rooms at French Lick and West Baden Springs Hotels, Valley Tower rooms are also at the center of everything: right next door to the Event Center, French Lick Casino, French Lick Springs Hotel and Valley Links Golf Course. Ready for a new type of stay here? Call (8

100th Anniversary of a Spectacle: The 1918 Christmas Circus at West Baden

This is our only known photo from the Army hospital's Christmas circus held 100 years ago on Christmas Day in the atrium of West Baden Springs Hotel. Below in the blog are zoomed-in photos for a little more detail on the circus tent and Christmas tree. All day long the celebrated atrium, one of the largest rooms in the world, rang and sang with laughter and greeting, from early in the morning when we were romantically awakened by the sound of the reveille until we closed our eyes that evening. The stories read like something from a Christmas fairytale. But they’re all true-life echoes from one of the most captivating days in West Baden Springs Hotel’s rich history. We’re nearing the 100 th anniversary of the day the hotel’s atrium staged a spectacle beyond belief — a circus performance on Christmas Day of 1918, put on for the soldiers who were staying there. At the time, West Baden Springs Hotel closed to guests for a seven-month span between 1917 and 1918 when it