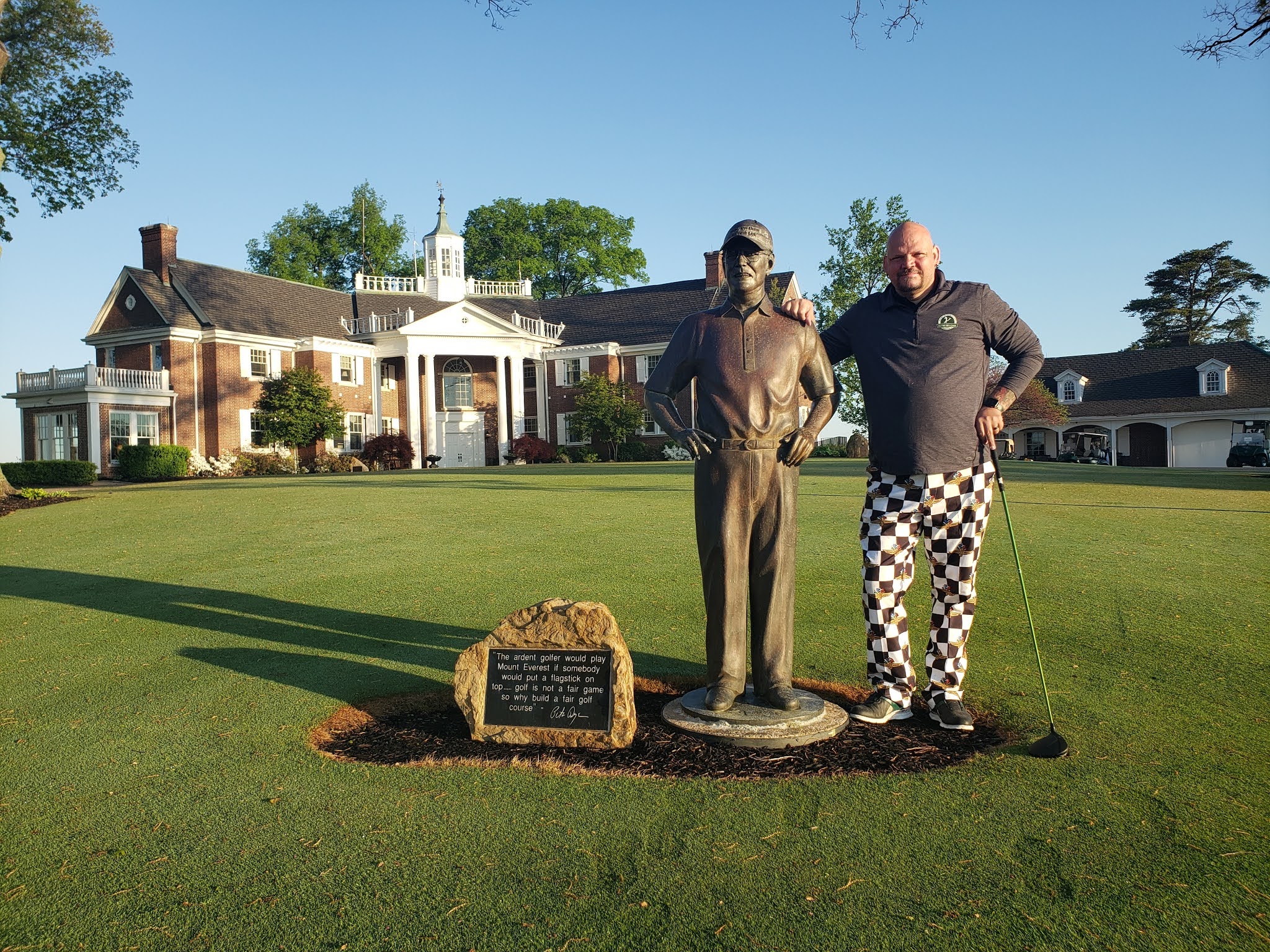 You couldn’t miss Dion Reid on Friday morning at The Pete Dye Course at French Lick. The guy in the black-and-white checkered Indy 500 golf pants. If you didn’t know better, he looked a Hoosier through and through.

Well … Hoosier for a day, at least.

By the time you read this, Dion will probably be on a golf course somewhere in Michigan. Or maybe New Hampshire or Arkansas or Montana. Or anywhere, really, because Dion is hitting pretty much every corner of the U.S. on a journey that’s just getting started.

50 rounds of golf, in 50 states, in 50 consecutive days. All for a worthy cause, as Dion’s goal is to raise $50,000 to benefit St. Jude Children’s Hospital. This is above and beyond bucket-list stuff. It’s 900 holes of golf, over the course of 7 weeks, spanning thousands of miles, no days off.

“The first five days won’t be that hard. Day 45 might be a little rough,” Dion says with a laugh, “but we’ll figure it out.” 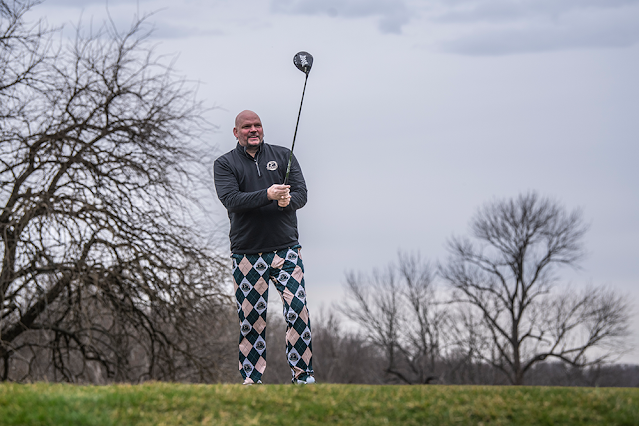 Dion turned — you guessed it — 50 years old earlier in April, and he first started planning this golf odyssey two years ago. Day 1 of 50 was Thursday in Tennessee. Day 2 brought him to French Lick for the Indiana leg of the journey. So why French Lick, of the hundreds of golf courses in the state?

“You guys had a charging station,” Dion says, and having someplace to charge his Tesla was actually a primary consideration when plotting out his journey.

“And, I’ve always wanted to play this course,” says Dion, who’d been to French Lick once before to play The Donald Ross Course. “As part of my trip, I decided I’d have a little bit of fun as well — play a couple courses that are a little extra, you know? And it’s a beautiful place up here.”

Dion was treated to a quintessential Pete Dye morning — sunny skies and a bold orange sunrise peeking through a blanket of fog. He realizes the weather might not always cooperate. But he’s bound to play through rain and foul weather if he can (think the famous scene from “Caddyshack,” he likes to joke), and even if a course closes for the day due to weather he plans to ask permission to at least hit a drive from the opening tee — just to say he hit a ball on the course.

He crammed the Tesla full of 50 plastic bins, each with a special pair of golf pants and shirt for each state, along with travel toiletries so he never has to worry about luggage or laundry. A software developer who’s wired to think in logic, even Dion admits that Hawaii and Alaska proved to be “a logistical nightmare.” (Those are legs #31 and #32, and you can click here to see how he’s planning to pull it off in the middle of the trip.) And he still has about 20 tee times that he has to call and book while he’s on the road.

And it’s all up to him, because this is a solo journey. (Unless you count his stuffed traveling companion, who has his own Instagram page to document the journey.) The road ends June 17 at Dion’s home course, Traditions Golf Club in Hebron, Kentucky, just outside his home in Cincinnati.

He’s no stranger to adventure, and has tackled a cross-country road trip before. But considering Dion arrived at French Lick on Thursday night and figured he might not sleep that night because he was so excited, the drive to complete 50 in 50 is in full throttle.

“This is a little bit more intense,” he says, “but it’s a challenge, and I’m having a good time with it.”

Want to donate to Dion’s cause or track his whereabouts during his cross-country trip? Just visit his website to learn more. 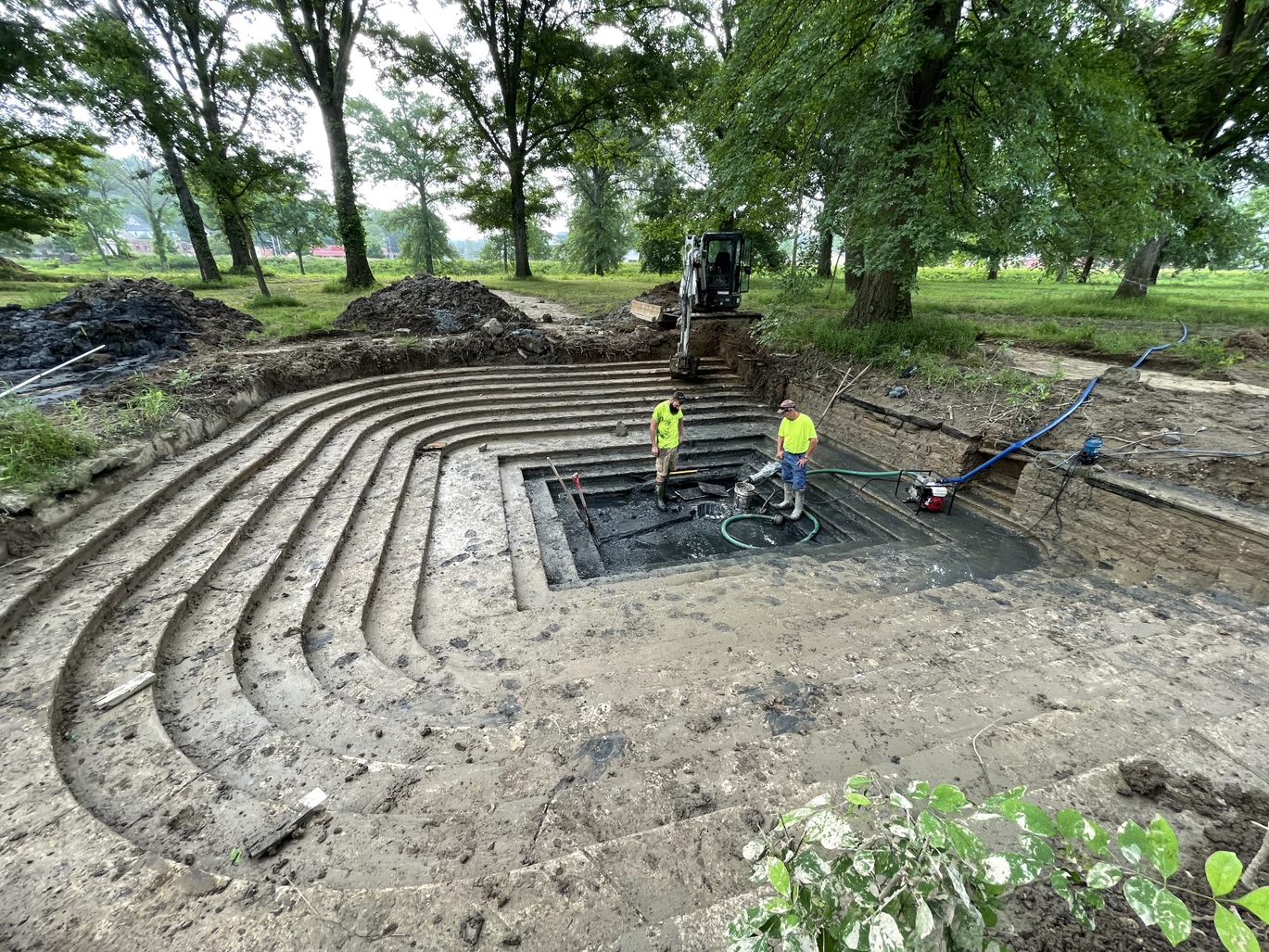 Rediscovering the Past at the Neptune Spring

This wasn't a surprise discovery. More of an “oh, hey, it's been a while.” As in more than 100 years type of a while. We always knew that the remnants from the old Neptune Spring — one of the four mineral springs on the West Baden Springs Hotel property where guests would "take the waters" in the early 1900s — were lurking beneath, and could possibly be unearthed with a little digging. Well, a few weeks ago we went digging and unearthed some more history. An aerial view of the old Neptune Spring before the water and mud were removed, and (below) part of the network of walking paths that were covered in soil and grass for several decades. It started as an effort to move some dirt for the Bowling & Billiard Pavilion, a historic outbuilding in the West Baden Springs Hotel Gardens that is in the process of being renovated. Just to the east of the gardens is what looks like a forgotten land. Nothing but grassy growth with the covering of towering trees overhead. Di 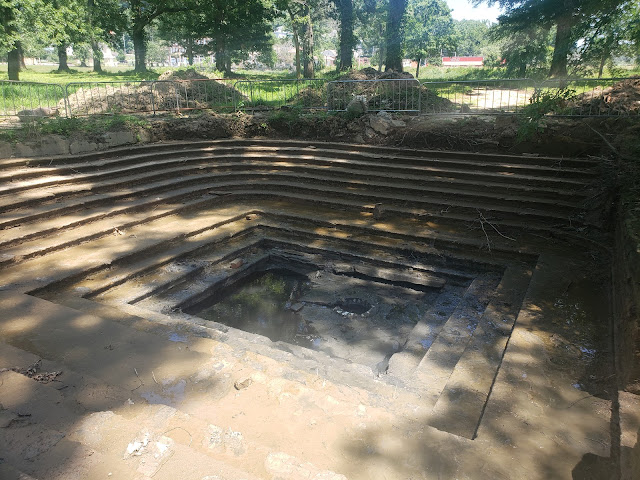 Well, it’s apparent you all appreciate history as much as we do. When we broke the news last month about re-discovering the Neptune Spring on the West Baden Springs Hotel property, the response on Facebook was overwhelming. 7,000+ likes, loves and “wow”s. 3,000+ shares. Nearly 900 comments. We received a lot of questions about it, and today we hopefully have a few more answers as we continue working to revive this historical site. Chuck Franz (Vice President of Cook Group, French Lick Resort’s parent company) and Justin Harris (French Lick Resort’s Director of Facilities and a licensed engineer) have been working closely on the project, and here’s what they can tell us about this 130-year-old spring that has been freshly unearthed. Some of the marble and glazed brick from the bottom of the spring house basin is still remarkably well intact after 100+ years of being  exposed to the elements. Q: Is the spring still flowing? Justin Harris: “That’s something we were curious to see

"So Cold the River" Stars on That First West Baden Moment

Remember that feeling of stepping under the West Baden Springs Hotel dome for the first time? Even Hollywood was blown away by it.  As we continue with our bonus content from the upcoming So Cold the River   movie set to debut March 25, hear from the the cast and crew about their first impressions setting foot inside West Baden's iconic atrium. Bethany Joy Lenz (“One Tree Hill,” “Dexter”) “I couldn't believe when we drove in, driving through a lot of country, cornfields, flat lands, and wooded areas … and of all of sudden there is this place that looks like a castle in the middle of nowhere. It's wild, but it's really beautiful and it's one of the things I love about exploring and finding hidden gems like this. The history here is outrageous — the fact that it has been here for so long, it's not just somebody built it like 25 years ago. I love learning about the Al Capone history here. I took a little peek over the old bowling alley pavilion, just kind of